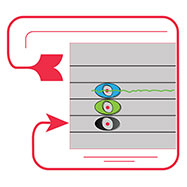 Your Personal Music Teacher that Listens to You

To explain what harmony is, let us take a simple example that we all know: Silent Night. In the church many people will sing this song at Christmas time. Together, children, women and men will sing the song. But the children will sing higher pitches than the men, and some women will sing somehow lower pitches than the children. Yet, if sung correctly, the sound will be pleasant and give the song some extra depth compared to an “All the same pitch” singing experience. This is because the different melody parts of Silent Night are sung in harmony.

If we start from another higher note and keep the intervals the same the score looks like this and of course will sound higher (starting note G4, seven half steps higher than C4):

However, both scores if sung correctly, will easily be recognized as the song: Silent Night. This is because the notes are relative to the starting note. To recognize a melody is not dependent on absolute pitches, but depends on the relative steps and times form note to note.

Now, to sing in harmony seems easy. If you are two persons, one person will sing the melody, let us say from the note middle C. Then the other person just starts at the same time from a different note.
Is it so simple? Unfortunately not! You might think let us just make the difference of the two melodies only a half step apart. This must sound good, since the melodies are the close together. But the contrary is the case: It sounds awful! That is because the pitches are so close together that they infer with each other and fight for dominance. Generally, the half step is considered the most dissonant interval when sounded harmonically (together).
To sing in harmony, the distances must be further apart and relate to each other in such a way that the natural dominant overtones support each other.

To understand overtones we have to go into physics. Yes, music also has to follow the rules of physics. Every natural sound has overtones. When a violin plays the concert pitch A and a trumpet plays the same concert pitch A, the frequency of the swinging will be 440 Hz for both instruments. However, the sounds sound differently, because the produced overtones are different. So, most likely the frequencies of the overtones are the same, because of the same physical laws, the strength of the overtones will differ. This is because the instruments have different sizes to resonate, and the used materials have different physical characteristics to reflect and transmit the sound.
The swinging of a string through the air produces a hear-able sound. A string, like in the piano, obeys the following physical law: The frequency of the swinging is reciprocal to the length. That is a guitar string pressed down in the middle will produce a sound, which will swing with double the frequency than the whole (open) string. In musical terms doubling the frequency results in going up one octave.

Coming back to harmony, singing the song a whole octave lower or higher than the first person results in harmony. This is because halving the length of a string is the simplest form, which can occur. In physics we speak of the first overtone. Therefore the two sounds are very similar. For harmony, it may even be a little bit too similar. So, it will give some depth to the sound, but not as much as the second overtone.

We get the second overtone by taking the next simple form a string can take. The next simple form is to split the length of the string into three parts. However, since the frequency is triple of that of the original string, the sound falls outside the octave. To lower the frequency we can just double the length of the third. Since doubling or halving a string is such a simple transformation we can ignore the effect for our purpose. In this way the second overtone, - in musical terms the interval is a fifth -, is the most important overtone for harmony. Everything in music is derived from these simple physical relationships of the overtones. This also applies to our Major scales with eight notes, which are also derived from the first overtones (see video: Scales and natural ratios).

The triad consists of the root note (the starting note) and a fifth (the note, which stems from the second overtone). For the third note, a note in the middle of the two notes was taken. This could be either a Major third or a minor third. Since the Major third belongs to the Major scale, it is a good candidate for harmony.

Here we have the relationship between the triad and harmony. To sing in harmony, you can use either the fifth or the third of the triad. Of course, - instead of going up a third or a fifth -, you can lower the third or fifth by an octave, and you will also get a nice harmony. Or, alternatively, - as we have seen in the beginning -, you can also use the note an octave higher or lower of the melody as a harmonic sound.

But wait! There is something wrong here. The tune is written in the key of C. That is there should be no notes, which use a sharp or flat. Some of the notes that we raised a Major third have gotten a sharp. Since the note in the middle of the triad, as we have said above, could be either a Major third or a minor third, we have to take the minor third in these cases instead. Since a harmony singer is a background singer, it is more important to emphasize the key of the melody than to keep the distances to the melody, we end up with the following possible notes:

As a background singer, you do not have to follow the melody; you can choose any of the notes, which fit the harmony. That is you are allowed to switch colors, e. g. if the blue notes go too high, you can switch to the green notes below. And if the melody later goes down, you can switch back to the blue notes again. In the scores, for harmony with two voices, to better distinguish the voices, the notes are often displayed with the stems going up for the lead voice (the melody) and going down for the second voice.

How to learn to sing harmony

Now, that you know that harmony stems from physical laws and is made from overtones, you can start learning to recognize and sing harmony. You do not have to know about physics and overtones; this was taken care of during the development of our music system. Our music system knows scales and triads. In this way it is important to get the feeling for scales and chords. Working with triads will greatly help to develop that skill.
Singing harmony helps you to deeply understand the relationship between different notes. You will hear intuitively what notes work well together.

The first step should be to learn to sing the melody on key. It is somehow unfair that you as a beginner, with a limited vocal range of notes you can sing well, have to sing the melody on key, whereas singers which know how to sing harmony, can evade the issue by using notes better suited to their range. If you are a beginner and have difficulties to sing on key, you should take a look at Listening-Singing-Teacher Software, which analyzes your voice and gives you feedback on pitch, beat and loudness. The exercises in Listening-Singing-Teacher allow you to transpose a melody so that the melody fits your vocal range.

The next step is to understand triads, the basics for singing harmony. Listening skills are very important in music. That means you should start with listening to triads. Listening-Music-Teacher breaks this process down to very simple ear training exercises:

First you will listen to the four possible triads, which can be made from the root note. These are the Major triad, the minor triad, the diminished triad and the augmented triad. Since you have the possibility to listen to all four combinations, it is easy to compare and pick the correct answer. After a while you will no more be listening to the samples, since you get the feeling for the qualities of the triads.

The next step is even simpler, as there are only three inversions possible and the change of the distance of the notes in terms of half steps is greater, thus easier to hear.

After having mastered the basic skill to identify the quality and inversion of a triad, you go on to analyze the chords, by listening to the chord and first singing the lowest note, then the highest note and finally the middle note of a triad. Being able to amplify and hold any note of a triad, will help you to feel the harmony.

To prove that you have understood harmony, the next exercise will only play two notes of the triad. Your task is to supplement the third note of the triad. (Here the two notes played and the note to sing are displayed, however in the exercises to reach the maximum number of points, the notes are not shown). 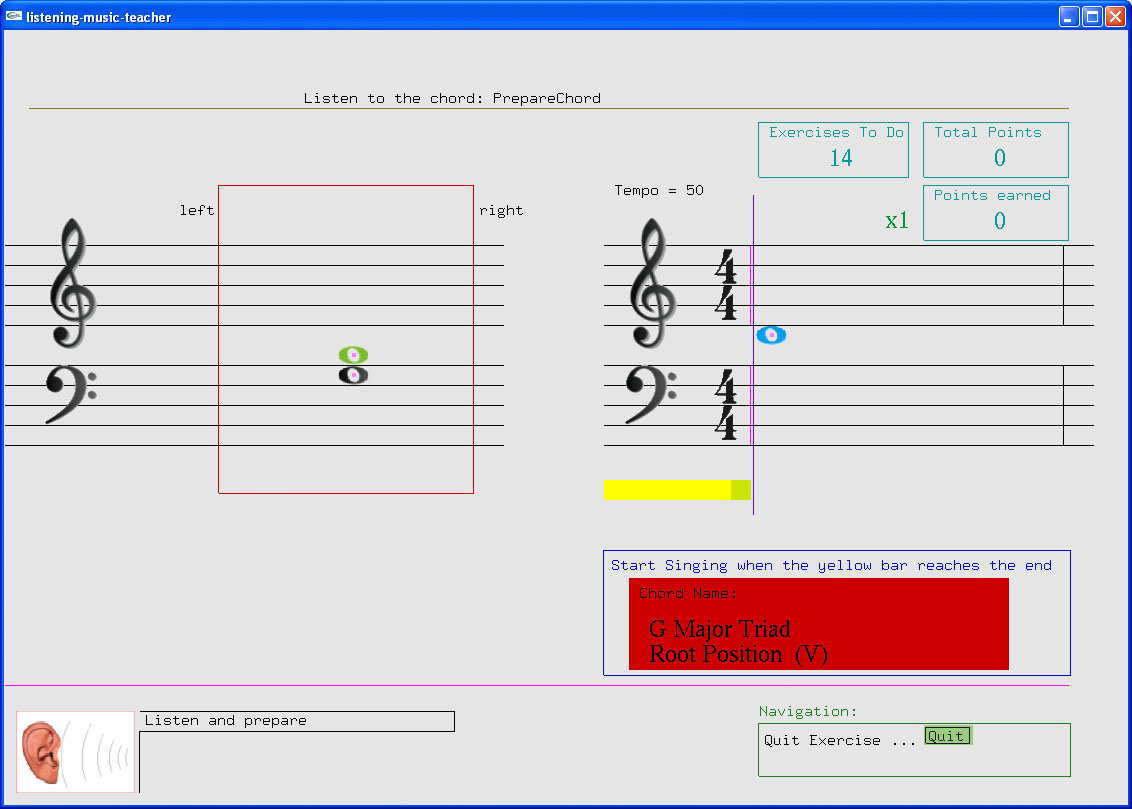 The last step is to sing an arpeggiated triad, that is, you sing the triad one note after the other. In the beginning you should use the possibility to listen to the first note and then complete the triad. After a while of practicing you will no more need to get the first note as a reference tone. If you do no more need the first tone as a reference for several days, and you do not do any warm up exercises which will give you some reference tones, before you start this exercise, you have reached absolute pitch: the skill to identify a note just by ear.

Listening-Music-Teacher also explains the seventh chords to add even further dynamic possibilities to produce tension and release for harmony singers.

Also keep in mind that singing harmony is following the lead singer. As a harmony singer you should not dominate the song, even if you experience great joy adding new elements and depth to the song. Depending on the chosen variations, the harmony sung on its own, does not sound very impressive. Especially, if the harmony is used to circumvent high and low notes. In this case the harmony will have a flatter melody than the original. But sung together, it gives the song much more depth.

So, get started, familiarize you with triads and do some exercises.